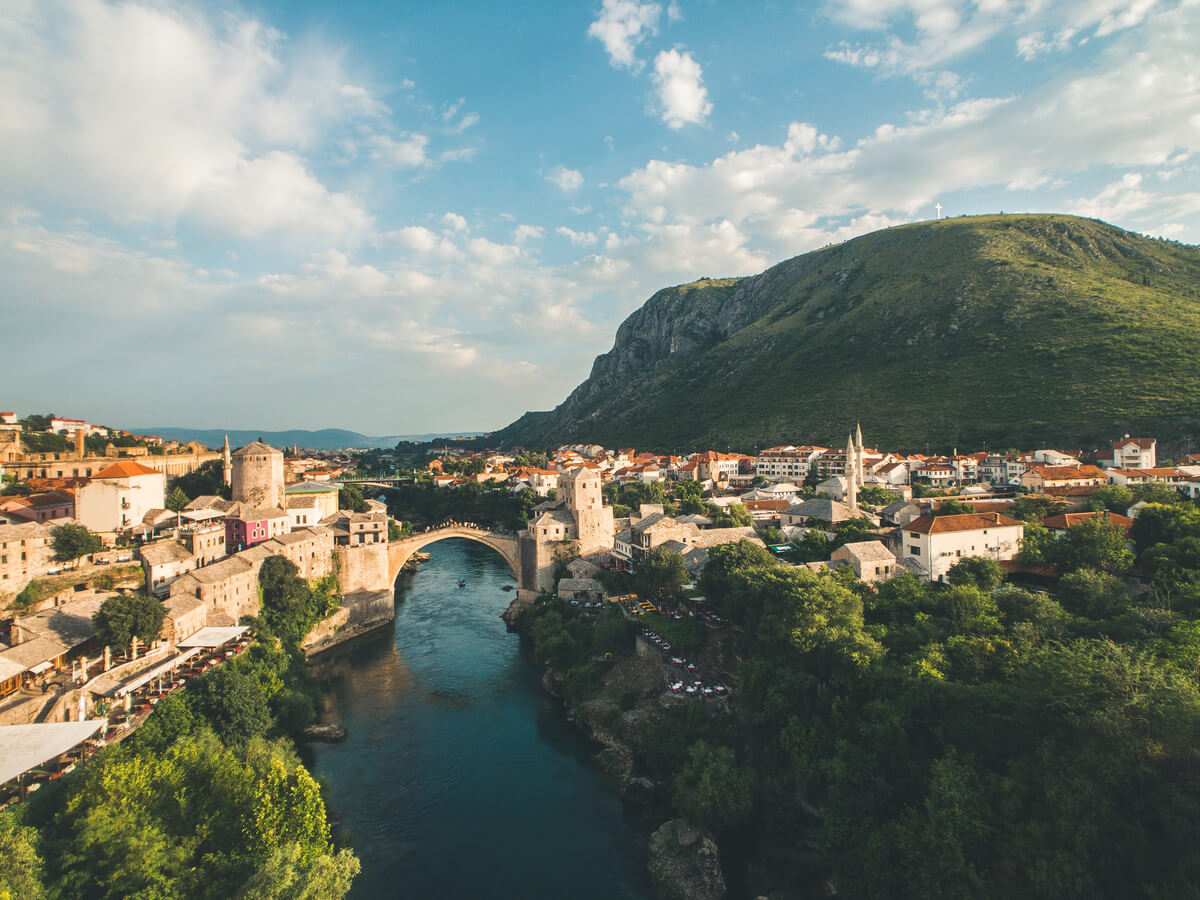 Herzegovina is a historical and geographical region in the southern part of Bosnia and Herzegovina. With its submediterranean and Mediterranean climate and numerous natural beauties and attractions, as well as religious tourism, it has become one of the most influential regions in south-eastern Europe, attracting a large number of tourists.

Mostar is the main cultural and political center of Herzegovina. At first glance, you can see the differences that make this city special.

The Old Bridge is a symbol of the city of Mostar. It was built in 1566, and it is 28.7 m long and connects the right and left sides of the Neretva river bank. The Old Bridge was added to the UNESCO World Heritage List in 2005. Probably the main attraction for tourist on the bridge are leaps in July. You can enjoy the view of the beautiful, clean Neretva River and the old town core. The oldest street in the Old town center is Kujundziluk from the middle of the 16th century. There are typical handicraft shops, traditional cafes, and restaurants, where you can enjoy traditionally prepared coffee and meals. In the past, this was a pile of shops, and today represents a cross-section of architecture and everyday life in Mostar.

The old Tabhana was built in the middle of the 16th century. It’s complicated for skin processing. The Tabhana guild had only one mosque because of the specific smell of skin. The miniature version of the Old Bridge, Kriva ćuprija, is located on the river Radobolja. It was built in 1558, before the Old Bridge, but it was destroyed in flood. It has recently been restored, and according to some traditions the Old Bridge has been constructed in its pattern.

Enjoying the beautiful panorama of the city is possible from the mosque, and the most beautiful view is indeed from Koski Mehmed-Pašina mosque built at the beginning of the 17th century. A unique, lovely ambiance surrounds it. The largest preserved mosque in Mostar is the Karađoz-bey mosque. Apart from the high-fashioned minaret’s attention, it also draws its dome.

In 1866, a Catholic church was built but then was destroyed in the 1992 war, but in 2000 a new one was made. This Franciscan monastery can boast of a library of 50,000 old writings, and it is the most extensive such library in this area. There is also an outstanding collection of paintings by Italian masters from the 16th and 17th centuries.

South of Mostar is the Monastery of Blessing of the Holy Virgin. It is one of the most important Orthodox monasteries in Herzegovina, from the 16th century.

The most famous manifestations in Mostar are the Mostar Fair, where many innovations can be seen in all areas of the economy, skies from the Old Bridge and the Days of the Croatian Matrix. Numerous musical and multimedia awards, performances, exhibitions, congresses, and gatherings are held in the Croatian House of Prince Stjepan Kosača. A rich cultural and historical heritage is collected and kept in the Museum of Herzegovina, which is worth a visit.

Great location of the city of Mostar, natural and cultural riches are the reasons for such visits of tourists. A significant advantage is the vicinity of the Adriatic Sea, which is only 60 kilometers away. To complete your stay in this beautiful city and make it as pleasant as possible we recommend you to stay in one of the beautiful villas we have in our offer.

This website uses cookies to improve your experience while you navigate through the website. Out of these, the cookies that are categorized as necessary are stored on your browser as they are essential for the working of basic functionalities of the website. We also use third-party cookies that help us analyze and understand how you use this website. These cookies will be stored in your browser only with your consent. You also have the option to opt-out of these cookies. But opting out of some of these cookies may affect your browsing experience.
Necessary Always Enabled

Any cookies that may not be particularly necessary for the website to function and is used specifically to collect user personal data via analytics, ads, other embedded contents are termed as non-necessary cookies. It is mandatory to procure user consent prior to running these cookies on your website.